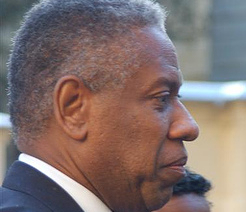 Fashion icon, André Leon Talley, died Tuesday at the age of 73, and in addition to his editorial work, the larger-than-life personality was also a confidante and stylist to many of the world’s biggest musicians.

In addition to styling countless magazine covers, the former-Vogue editor dressed Jennifer Hudson for the 2007 Academy Awards, And after departing the world famous fashion mag, Talley developed a wearables line with his friend Will.i.am and served as a behind-the-scenes consultant for a number of artists, providing guidance on album covers and personal branding.

Andre was one of the few journalists who had direct access to Kanye West, interviewing the rapper-cum-designer multiple times while he was developing his Yeezy fashion line and attending the musician’s wedding to Kim Kardashian.

While the 6′ 6″ tall fashionisto made cameos on everything from Sex and the City to Empire, music fans will best remember Talley’s appearance in the 2006 video for Mariah Carey’s “Say Somethin” – featuring Snoop Dogg and Pharrell – from The Emancipation of Mimi album.

Filmed inside the Louis Vuitton flagship store in Paris, the “Say Somethin” video features Talley and Carey surveying shelves of clothing and accessories inside the luxury boutique, as the singer preps for a night out on the town with Pharrell. Talley also styled Carey in some of the looks featured in the clip.

Andre and Mariah remained close friends with Talley most recently helping Carey pick out a gown for a 2017 performance honoring Chanel’s Karl Lagerfeld.