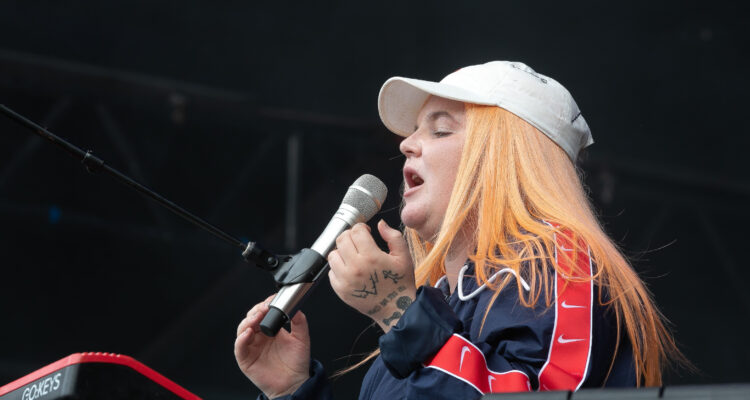 Five months prior to Halloween 2021, Tones And I releases her demonically inspired single, ‘Won’t Sleep.”

Rocking a Pinkie Pie-inspired hair doo and a chin that would make Bruce Campbell jealous, In her brand new release, the international phenomenon behind “Dance Monkey,” proves that Halloween should be a daily celebration. In the video for the single, a pair of intrepid youths come across a bacchanal from Rob Zombie’s subconscious riddled with as many horror references as an issue of Rue Morgue magazine. They are fortunate to survive the night (spoiler warning! ) and as with any good horror film there’s a delightfully wicked twist at the end.

Under normal circumstances, this mini-film might be frightening, but the song at the center of it all only adds to the enjoyment of the accompanying visual as Tones (born Toni Watson) sings, “They say you’re never too young for a party / They say you’re never too young, come and play / No one cares if you’re nice or naughty / You still get presents on Christmas Day.” And before delivering the chorus that’ll stick in your head, the Australian artist sings against an irresistible rhythm.

“I had a lot of fun writing [“Won’t Sleep”] and experimenting with the production, bass, and drums. “It’s a song about my friends and I staying at home and partying through lockdown,” Tones states in  a press release about how she came up with the visual to go along with her artistic endeavor. “I imagined the craziest thing ever… and that’s exactly what I wanted it to be. There are a lot of prosthetics and different characters in this video, as in most of my videos, and I had a lot of fun filming it!”

The Elecktra Records / Sony Music talent delivers her first new music since a fruitful 2020 with the release a handful of songs, including “Bad Child,” “Can’t Be Happy All The Time,” “Ur So F**king Cool,” along with “Fly Away” that was dubbed “one of her most personal compositions,” racking up 160 million streams. Demonstrating that she has more talent than her viral debut, “Dance Monkey” Tones And I have also performed “Fly Away” on Jimmy Kimmel Live! and The Ellen DeGeneres Show.

Tones’ new single, “Won’t Sleep,” is out now and marks the launch of their  debut album set to be released later this year. She told MTV last year, “It’s definitely all over the place….All of these songs were written by me and produced by me. It isn’t influenced by other songwriters or someone trying to help me get a hit because it has never been a priority for me… It’s a proud moment when you can look at something you’ve worked hard on and know you’re good enough, which is not something to be taken lightly. When you truly, really feel that, remembering that you’re OK the way you are and that you’re good enough is a big deal.”