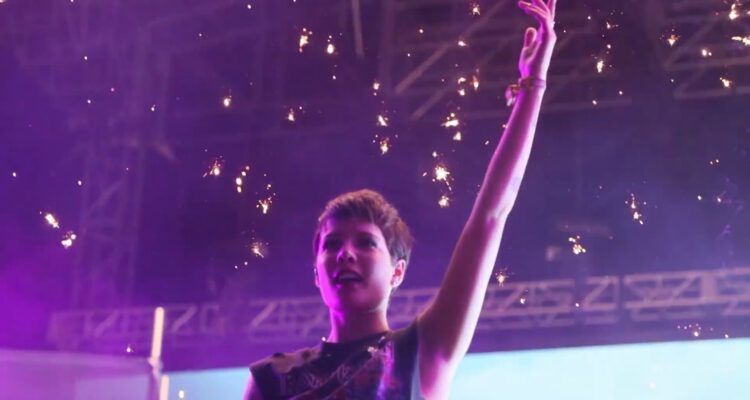 During her her fourth musical guest appearance on Saturday Night Live, Halsey was accompanied onstage by former Fleetwood Mac singer-guitarist Lindsey Buckingham for an emotional performance of “Darling” … the acoustic ballad from the singer’s latest album If I Can’t Have Love, I Want Power.

For her first number and wearing a leather bodysuit against a futuristic backdrop, Halsey delivered a stunning performance of their lead single “I Am Not A Woman, I’m A God.”

A frequent guest on SNL over the years, Halsey made their debut in 2018 performing the single “Bad At Love” from her sophomore album Hopeless Fountain Kingdom and was subsequently joined by G-Eazy joined them onstage for “Him & I” from the rapper’s fifth studio album The Beautiful & The Damned. The recent mom also pulled double duty as host and musical guest in 2019, becoming the 38th entertainer to handle dual roles.

In August the singer released her third studio album If I Can’t Have Love, I Want Power in August. Produced by Nine Inch Nails’ Trent Reznor and Atticus Ross, the full length chronicles the beauty and pain of motherhood. “The idea that me as a sexual being and my body as a vessel and gift to my child are two concepts that can co-exist peacefully and powerfully,” they said of the record on Instagram.

Supporting the recent LP, Halsey shared an hour-long IMAX movie, which grossed nearly $1 million at the box office during its limited theatrical release in August. Described as an “evocative, horror-tinged fairytale, the concept film ” will be available to stream via HBO Max come October 7.