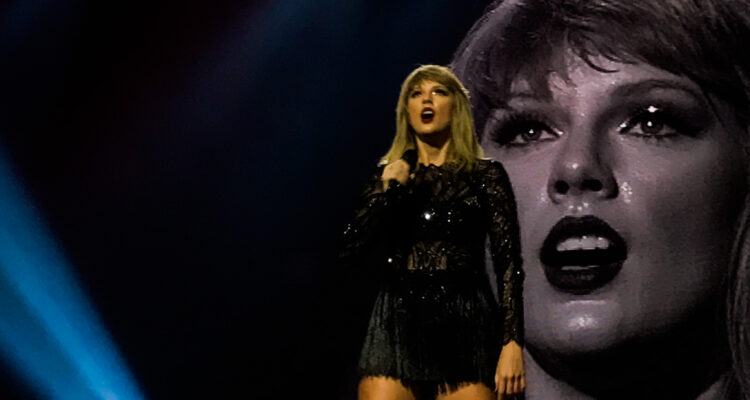 During the international superstar’s 5th music guest spot appearance, Taylor Swift stopped time in its tracks with her live television debut of the expanded version of “All Too Well” during this week’s Saturday Night Live.

Officially released on the prior Friday, the 10-minute track comes from Red (Taylor’s Version), her second re-recorded album from the songstresses catalog. In lieu of performing two songs as the most SNL, musical guests do, Swift played just the one title from her latest LP.

The background setting for the multi-Grammy winning singer’s heart-wrenching live performance was the song’s accompanying short film which Taylor wrote, directed and starred in, featuring Sadie Sink and Dylan O’Brien. As she concluded the end of the cult-favorite power ballad, fake snow fell around Swift’s shoulders mirroring the visual behind her.

The 13-minute video included homages to the symbolism in the song’s verses including the infamous scarf (which was rumored to be left in a drawer at Maggie Gyllenhaal’s home,) and a dance between Sink and O’Brien amidst the kitchen’s refrigerator light. The short film was also filled with Easter eggs like the color of Sink’s hair, a red typewriter and even a 13-year flash-forward from Sink and O’Brien’s breakup.

Initially released in 2012, Red was re-recorded after the original masters were sold by Swift’s label Big Machine to Scooter Braun’s Ithaca Holdings. Red (Taylor’s Version) features a 30-song tracklist with songs “From the Vault” — ones that didn’t originally make the album — and collaborations with Chris Stapleton, Phoebe Bridgers and Ed Sheeran. Swift shared her first re-recorded classic Fearless (Taylor’s Version) in April.