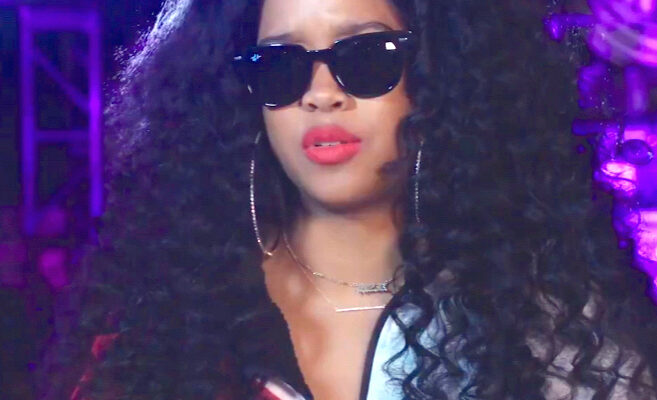 H.E.R. Kehlani + Zendaya Were The Band That Never Was

H.E.R., Kehlani, and Zendaya are the musical trio that we never knew (could have) existed!

The 23-year old, H.E.R. (born Gabriella Sarmiento Wilson) recently spoke with The Carlos Watson Show about meeting other young musicians while growing up in California and being part of a band with R&B artist Kehlani when she was younger. The already four-time Grammy winner speculated that Euphoria actress Zendaya could have been added to the mix: “D’wayne Wiggins’ son from Tony! Toni! Tone!, Dylan Wiggins  – used to be in the same band,” said the “Best Part” singer.  “We used to perform together when we were really young and Kehlani was actually in our band.” “We used to sing together all the time. At one point, Zendaya was supposed to appear in it. We used to perform together in Oakland, where I first came into the frame.”

Poplyfe was the name of the teen girl group that was featured on season 6 of America’s Got Talent and H.E.R. was a child prodigy who was a published poet and sang at the Apollo Theater before the age of ten.

Presented by Zendaya, H.E.R., Tiara Thomas, and Dernst “D’Mile” Emile II won this years Oscar for Best Original Song for “Fight for You” from Judas and the Black Messiah and called the awards she’s got “just icing on the cake.”

In an interview with Janine Rubenstein on PEOPLE’s daily podcast, PEOPLE Every Day, the singer/songwriter explained, “It’s really the process that I’m in love with,” “It’s the week before the award shows. It’s being in the studio and making this music, then hearing people’s reactions during shows and putting together the arrangements for these live performances. For me, those are the moments that matter.”