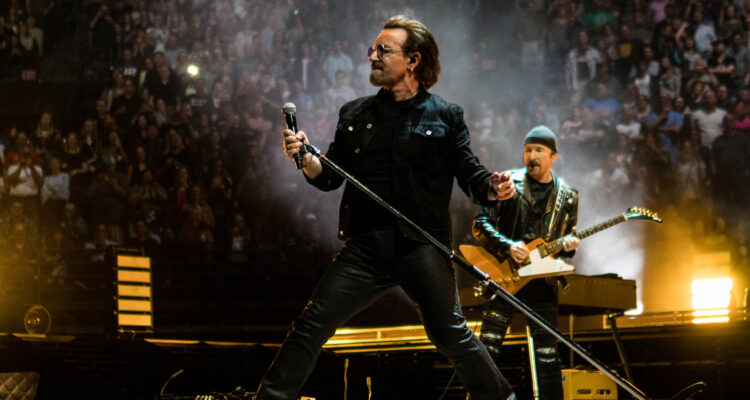 After receiving a personal invitation from Ukraine president Volodymyr Zelensky, U2’s Bono and the Edge visited Kyiv on Sunday (5.08) to perform an acoustic concert in one of the city’s subway stations-turned-bomb shelters.

Stated Bono to the audience of soldiers and civilians “The people in Ukraine are not just fighting for your own freedom, you are fighting for all of us who love freedom,” “We pray that you will enjoy some of that peace soon.”

Throughout the intimate set of U2 hits “With or Without You,” “Desire,” “Angel of Harlem,” “Vertigo” and a rendition of Ben E. King’s “Stand By Me” that replaced the titular “Me” with “Ukraine.” the rock duo were joined on their impromptu stage by Ukrainian musicians including singer Taras Topolya from the Ukrainian band Antytila.

Taking to their social media accounts Bono and the Edge tweeted “President @ZelenskyyUa invited us to perform in Kyiv as a show of solidarity with the Ukrainian people and so that’s what we’ve come to do,”

In April Bono and the Edge took part in Global Citizen’s “Stand Up for Ukraine” livestream, where the duo played a rendition of “Walk On” that addressed the invasion.

“The brave people of Ukraine are fighting for their freedom — and for ours — in the face of unspeakable violence and an unjust invasion.” “More than 4 million people, mostly women and children, have had to flee for their lives — a population nearly the size of Ireland. World leaders must stand up and stand by Ukrainians now … those who are fighting and those who have fled … and stand with refugees everywhere who have been forced from their homes and their lands.”

Bono also penned a poem about the Ukraine invasion that was read aloud by Nancy Pelosi.