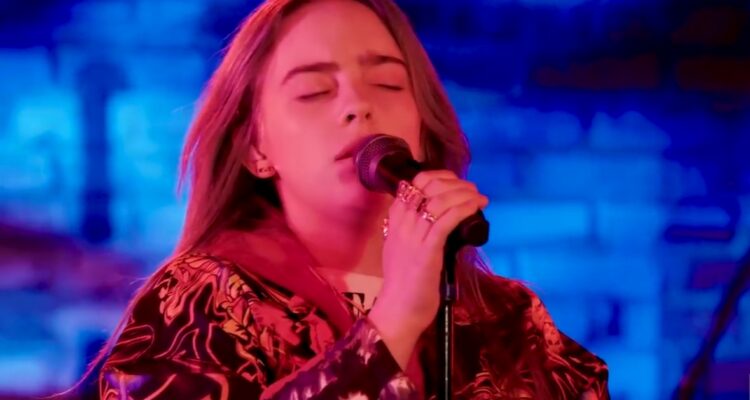 After becoming the most pre-added album in Apple Music history – with over 1,028,000 fans eager to get the ingenue’s newest LP – Billie Eilish hopes her new collection “doesn’t disappoint.”

The super-talented singer/songwriter will drop her second studio full length ‘Happier Than Ever’ on July 30, following her 2019 record-breaking ‘When We All Fall Asleep, Where Do We Go?’ And in an interview with Zane Lowe on Apple Music 1, Billie said “That’s nuts. Wow, that’s nuts. I hope it doesn’t disappoint.”

In support of her second album, the 19-year old just announced a one-off BBC special, Billie Eilish: Up Close that will air on Saturday (7.31) at 10.30pm (local time) with Radio 1 DJ Clara Amfo set to interview the pop sensation about her meteoric rise to superstardom and being a role model.

Airing the day prior to the release of the Grammy-winner’s heavily-anticipated second LP, a press statement read: “In this 45-minute entertainment special filmed in Billie’s home town of Los Angeles, BBC Radio 1 DJ Clara Amfo will talk to Billie about her latest album ‘Happier Than Ever’, her extraordinary rise to fame, looking back at her remarkable success, the effect it has had on her life and her role as an inspiration for young people all over the world.”

Following in the footsteps of Adele, Ariana Grande and Harry Styles who’ve previously had their own ‘At The BBC’ TV specials, Billie is set to make her BBC Radio 1 Live Lounge debut on Saturday from 11.15pm on BBC iPlayer.

Additionally, Eilish just announced the premier of her cinematic concert experience, Happier than Ever: A Love Letter to Los Angeles, exclusively on Disney Plus come September 3. The show will feature an intimate performance of every song in the album’s sequential order from the Hollywood Bowl.

In a statement about the production, Eilish said: “Disney is incredibly iconic, so to collaborate on something like this is a huge honor. To be able to present my album in this way and dedicate it to the city that I love and grew up in is so exciting to me. I hope you love it.”

Directed by Robert Rodriguez and Patrick Osborne, Happier than Ever: A Love Letter to Los Angeles will include animated elements, taking viewers on a dreamlike journey through Billie’s hometown of Los Angeles and will feature her brother Finneas, the Los Angeles Children’s Chorus, the Los Angeles Philharmonic conducted by Music & Artistic Director Gustavo Dudamel, and world-renowned Brazilian guitarist, Romero Lubambo, with Orchestra Arrangements by David Campbell.