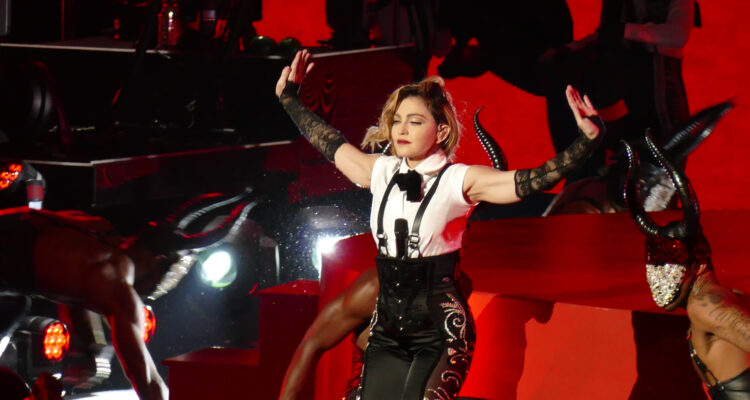 Madonna Stands Up For Britney’s Battle Against Conservatorship

The latest celebrity to back the singer’s bid to end the 13-year arrangement, the forever outspoken, Madonna has gone public to compare Britney Spears‘ conservatorship to modern slavery.

The world’s most popular singer/songwriter who famously shared on onstage kiss with Britney during the 2003 MTV Video Music Awards, took to her Instagram Stories account with a photo of herself wearing a T-shirt featuring the embattled singer’s name on it.

Included in her social media post is the caption: “Give this woman her life back Slavery (sic) was abolished so long ago! Death to the greedy patriarchy that has been doing this to women for centuries. This is a violation of human rights! Britney we coming to get you out of jail!”

Dating back to 2011, the “I’m A Slave 4 U” singer credited Madonna, with whom she collaborated on “Me Against the Music” with inspiring her to put her life back together after her emotional breakdown 13 years ago. In an interview with Harper’s Bazaar magazine, Spears stated: “I guess she’s (Madonna) really taught me to stay true to myself. That seems like a simple thing to say, but she taught me through action, not just by saying it,” . “There are so many people around you that have opinions, but you just have to listen to your instincts.”

Along with ex Justin Timberlake, Miley Cyrus, Mariah Carey, and Halsey who’ve all lent support to the ‘Free Britney’ campaign, Madonna is the latest in an ever-growing list of pop stars to support Spears’ legal battle.

In 2008 Britney’s financial and personal affairs were initially placed in the care of her father, Jamie Spears, following her public breakdown. However, last month the musician gave shocking testimony in court about her alleged treatment, calling for an end to the arrangement. Los Angeles County Superior Court Judge Brenda Penny denied an initial request to remove her father as her conservator on 30 June. Another hearing will be held on 14 July though her court appointed attorney as well as her longtime manager, Larry Rudolph, have since resigned.