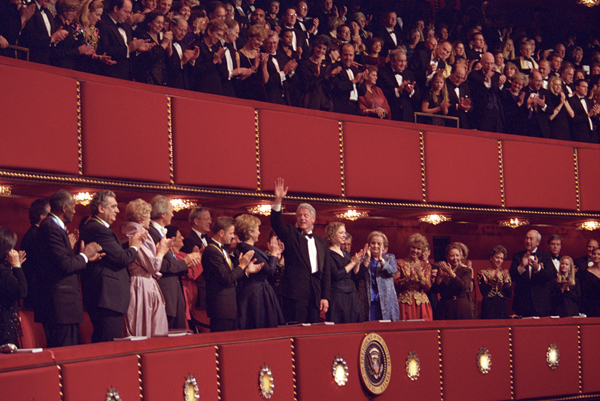 In a statement during the black-tie reception at the White House, the 46th president of the United States said “To all of the Kennedy Center honorees past and present, thank you for sharing your gift with the nation and … with the world.”

Bette Midler, a singer and actress, has received Grammy, Emmy, Tony and Golden Globe awards for a career spanning decades, with over 30,000,000 albums sold. Actresses Goldie Hawn, Scarlett Johansson and Barbara Hershey paid tribute to her at the event. “Nothing stops Bette,” said Hawn. And Midler dished “It was divine at the White House,” she said. “Very clean. Lovely. Great staff. Food was excellent. Wine was a little sweet.”

Singer-songwriter Joni Mitchell, known for hits such as “Both Sides, Now” and “Big Yellow Taxi,” is a multi-Grammy recipient and an inductee into the Rock & Roll Hall of Fame. The show opened with performances of her songs “The Circle Game” and “A Case of You” by Norah Jones and a soaring rendition of “River” by Brandi Carlile.

Berry Gordy, a songwriter and record producer from Detroit, founded the Motown record label that was responsible for signing the likes Diana Ross, The Temptations, Stevie Wonder, Smokey Robinson & The Mirackes, Marvin Gaye, The Four Tops. and Lionel Richie. In celebration, Stevie sang and played “You are the Sunshine of My Life” and “Superstition.” and Smokey also sang and paid tribute to his friend, Berry.

The Kennedy Center Honors will be broadcast on CBS-TV on Dec. 22.