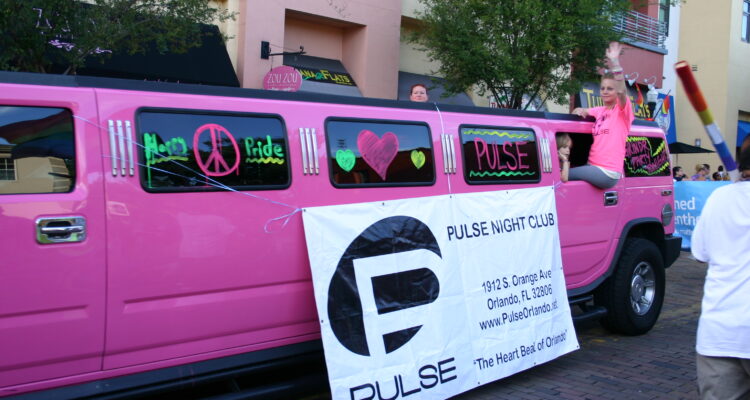 The 5 Year Anniversary Of The ‘Pulse’ Nightclub Massacre

Half a decade since a shooter opened fire at a gay nightclub in Orlando, Florida, killing 49 people and injuring many more, DeLand Pride executive director Ann-Marie Willacker stated “The communities that have grown out of this tragedy, the connections that have come out of this tragedy, are something to celebrate.” Willacker spoke to the 50 or so individuals who met at Abbey’s Bar this weekend before marching to the junction of New York Avenue and Woodland Boulevard and holding rainbow flags and Pride banners for 49 minutes. “To see this crowd here today and the diversity, it was awesome,” Ann Marie remarked. “This is so overwhelming.” Volunteers recited the names of the 49 deceased from each corner of the crossroads, the solemn ceremony interspersed by joyful honks from passing motorists.

DeLand Pride was founded in the aftermath of the massacre with many members of LGBTQ+ community coming together in the aftermath of the tragedy to grieve, including the founder’s son, PJ Peck, who lost friends in the assault and was circling the crossroads, offering directions and putting flags in plants that hadn’t made it into anyone’s hands.

One of the volunteers, Liberty Johnson, stood on the northeast corner, reciting a long list of names and stating “It’s overwhelming in every way, in every manner.” “Sadly through tragedy comes growth.”  Johnson, who took her three children to the event reflected, “It’s a lot,” “It’s hard to talk to anyone about it, but I want them to understand how important it is to remember and honor the 49.” Danielle H. stood on the southeast corner, a little rainbow flag in her shaky hands, reading the list of names. She had just lived in DeLand for a few years and this was her first time attending the event. “In the end, you love who you love and you shouldn’t be made to feel ashamed for that,” she remarked.

According to Luz Batista, the incident had a catastrophic impact on Central Florida, particularly among Latinos. The massacre occurred on Latin night, and many of the dead were of Latino descent. “It was like 9/11 in New York,” said Batista remarked who came to the event with her trans teenage son on Saturday. “The love that we give him is unconditional,” Batista stated. “This generation is far more accommodating than previous generations. There is still apprehension.” The event was scheduled to grow more joyful on Saturday evening, with drag bingo and a line-up of seven artists at the Abbey Bar to commemorate DeLand Pride’s fifth anniversary. Willacker said of the tavern, which is situated at 117 N. Woodland Blvd., “Abbey’s always been our home base,”

Attendees claimed West Volusia County has been more accepting to the LGBTQ+ community in recent years. Sember Smathers described DeLand as “They’re pretty embracing…Moving here I was a little nervous,” Batista, who lives in Deltona, said. “The support here is amazing.”

Until a man gunned down 58 people on the Las Vegas Strip the following year, the Pulse nightclub tragedy was the bloodiest mass shooting in American history at the time and after a three-hour confrontation, Orlando shooter Omar Mateen was slain. He had declared his support for the Islamic State.