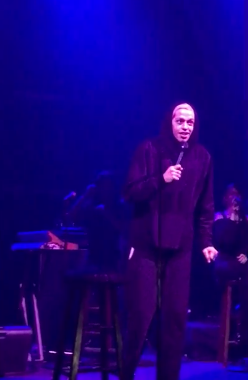 As part of the Netflix Is a Joke Fest in Los Angeles, on Thursday night, Pete Davidson did a standup set addressing what it’s been like to be the target of Kanye West’s hate after he started dating Kim Kardashian.

Starting the routine, the SNL cast member said “I had an AIDS scare this year. Yeah, I did. And you’re like, ‘Pete, Wow. What’s going on in your life? Are you sharing needles? You’re doing heroin? You have tons of unprotected sex?” “No, Kanye told me I had AIDS and he’s a genius. I was like, ‘Oh fuck.’ I better call my doctor. The guy who made College Dropout thinks I have AIDS.”

Davidson added that he went to get checked for the sexually transmitted disease and it “turns out I don’t have AIDS. I just look like I have it.” and joked that John Mulaney encouraged him to “spread a rumor that [West] has polio,” since accusing someone of having AIDS seems like a pretty outdated dig.

About the lack of advice he’s gotten on how to approach the Kanye bullying, Pete stated “It’s been a really weird thing to go through.” “People try to give you advice but even friends that are older than me are like, ‘I don’t know. He looks pretty mad, bro. Good luck! Sorry. Here if you need.”

Concerning people who ask about his friend Jack Harlow being featured on West’s “Louis Bags” from Donda 2, Davidson said “They’re like, ‘How does that make you feel? Does that bother you? Does that get under your skin?’ And I’m like, ‘No, he’s a rapper.’ That’s his field. That’s what they do. It doesn’t hurt my feelings.” “It would hurt my feelings if I saw Bill Burr at Sunday Service.”

For much of early 2022, Ye attacked the comedian on social media for his relationship with his ex-wife, Kim Kardashian and claimed that Davidson even texted him while “in bed with my wife“ and expressed his “concern” that the comedian/actor would hook Kardashian on drugs. He also cropped a claymation video where West decapitates the comedian and made another video for the same song where Davidson gets beaten up.