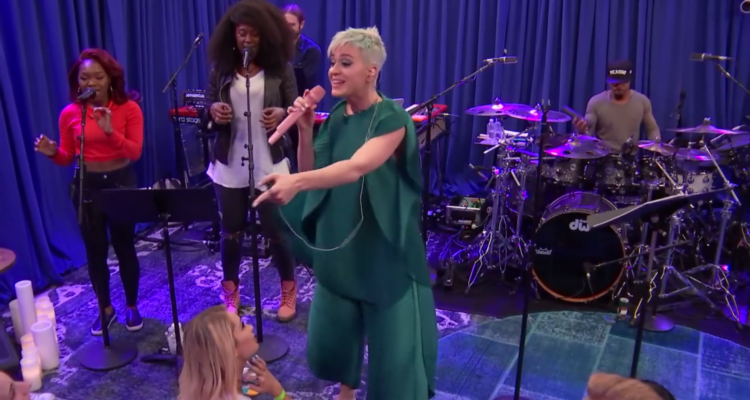 As part of Gap‘s brand new Baby2Baby advertisement campaign, Katy Perry covers The Beatles ‘All You Need Is Love’ classic.

Now 37, the pop superstar – who became a mother for the first time to daughter Daisy Dove Bloom, with fiancé Orlando Bloom, in August 2020 – performs her take on the Fab Four’s 1967 hit for the clothing company’s holiday campaign commercial. And she’s teamed up with Spotify to donate $1.00 for every stream of the track to a non-profit, which provides children living in Los Angeles with essentials like diapers and clothes.

Accompanying a clip from the TV advert, former Gap shop assistant Perry took to Instagram with: “From folding sweatshirts at the Santa Barbara Gap to 20 years later, starring in a @markromanek-directed holiday campaign dreams do come true! And @gap is also helping to make dreams come true for @baby2baby. Starting today, Gap is donating $1 per @spotify stream of my version of the song featured in the Gap ad – up to $100,000 USD – to support @baby2baby’s mission to provide basic essentials to children living in poverty across the country.? Link in bio to listen + help one of my fav causes (sic)”

The ‘California Gurls’ hitmaker added: “So so proud to be her mother. It’s an experience unlike any other. Now that I’m a mom my life is totally different and yet I realized, it’s kind of similar to being a pop star. You’re up all night, usually holding a bottle of some kind, there’s vomit on the floor, and your boobs are always out.”

Calling her daughter Daisy as the “greatest gift”, the multi-hit singer/songwriter said: “I think what children do, in general, is teach you that all you need is love.” And discussing how she has had to “strike a balance” between her career and being a new mom, Katy shared: “I made a conscious decision to become a mother, but I didn’t know until I became a mother that you have to strike a balance. [Motherhood is] all the clichés and more. Let me tell you as someone who has done and seen everything, there’s nothing better than having a beautiful, pure child. They’re just the epitome of love.”