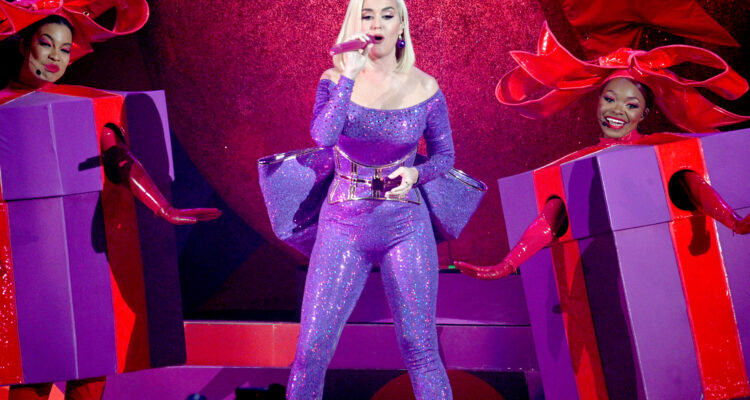 In support of their recent collaboration Katy Perry and Alesso have just released the new video for their electro-pop dance single “When I’m Gone.”

Premiered during halftime at Monday night’s 2022 College Football Playoff National Championship game, the moment marked the first time ESPN has premiered a music video during a live broadcast. The Hannah Lux Davis-directed visual opens with Perry in a phone booth declaring, “I just think it’s time to give them everything they want,” before she and the Swedish deejay/producer/artist navigate and dance their way through a futuristic world.

In a statement about the mini movie Katy commented: “When it comes to my music videos we all know I like to push the boundaries and myself, and create unique opportunities for my fans to see them.” “ESPN and especially College GameDay hold a special place in my heart, so partnering with Alesso to become the first artists to ever debut a global music video within a live event on ESPN made for a perfect and natural pairing.”

Alesso added: “I’m so thrilled that ‘When I’m Gone’ is finally out. We’ve been waiting the whole year to share it with all of you.”

“When I’m Gone” is Perry and Alesso’s first collaboration and it’s the second single Perry released in 2021 following “Electric,” which dropped in May as part of the Pokémon 25 soundtrack. Alesso has released four singles last year, including “Chasing Stars,” a collaboration with Marshmello featuring James Bay.

Perry is in the midst of her Las Vegas residency, Katy Perry: Play, at The Theatre at Resorts World Last Vegas, that kicked off on New Year’s Eve.