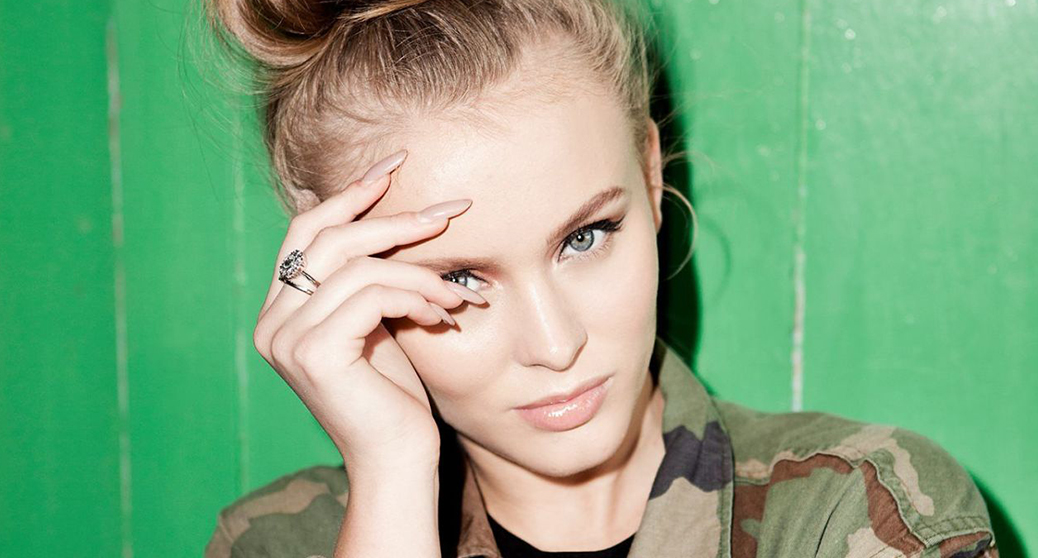 The history of Swedish pop can be traced back to timeless acts such ABBA and Robyn all the way to today’s chart-toppers such as MØ, Tove Lo, and Icona Pop, and it’s pretty clear how much Americans love the genre. Now there’s a new act on the scene and she’s planted her flag in the U.S. in a major way. Less than two years ago 18-year-old Swedish pop sensation Zara Larsson debuted her album 1 which hit platinum in her native country. As of today, her newest single “Never Forget You,” a collaboration with Grammy-nominated singer MNEK, is No. 1 on the Billboard Dance Charts as well as No. 15 on the Billboard Hot 100 and going strong.

Larsson gave the song its national debut on The Tonight Show With Jimmy Fallon where she delivered a show-stopping performance where she was accompanied by her backing band along with a string quartet. “Never Forget You” is the first of many singles that promotes her second album, which has yet to be titled but is secured for a June 2016 release and will include even more tracks produced by MNEK as well as potentially legendary producer and fellow Swede Max Martin. In a recent interview with Billboard, Larsson discusses her experience working on the album as well her take on the prominence of today’s Swedish pop scene.

On growing up in Sweden and making music

My theory is [because] in [Swedish schools] you need to know an instrument. You’re obligated to take music classes. Even in elementary school, we start at first or even in kindergarten with ukulele and guitars and we sing songs. Sweden is also built totally different when it comes to the society. We are built on socialism, and that makes us basically solidaric, so we depend on each other, which is a great thing because we don’t have to pay for school, we don’t have to pay for college, we don’t have to pay to go to the dentist or the doctor, so even if you don’t have a stable income, you will still be able to get an education or the health care that you need. That makes it possible to actually focus on creative stuff. We have a history of great producers – ABBA and Max Martin – we have proof of people being successful from Sweden. Could you imagine being from Siberia? Like, a small part of Russia, where it’s like, “When was the last time Russia was having a super big international pop star in the U.S.?” I don’t know, but I can name a few from Sweden. I think that gives us a lot of confidence in being pop stars because we’re like, oh, we actually can. We know we can.

On working with MNEK

Oh no, I actually didn’t know who he was. After we did the session, I figured out that I’ve heard his music a lot of times; I did know who he was. He’s probably one of the most talented people I’ve worked with, so that was a great day for me. We wrote a great song, and [we wrote] a lot of songs after that.

On working with Max Martin

I’m hopefully going to work with him when I come back to L.A. When I was there, he was like, “Frankly, I don’t really have the time for you right now” because he was finishing up Ariana [Grande]’s album and finishing up a few songs from The Weeknd’s album, which I respect, because he was like, “I want to give you my full attention, and if I have other projects I’m thinking about, I can’t do that. I don’t want to run in and out of the session — five minutes here, five minutes there — just to put my name on it.” He’s super sweet.

On working with other producers for the album

That’s the last thing I’m going to decide. Producers — I’m so bad at that as well. I don’t really know a lot of producers. I’m just into Beyoncé. If I get a nice vibe from [a producer], I don’t really care if they‘ve done blah blah blah. If they don’t give a nice vibe, I absolutelydon’t care if they’ve done 20 number ones, so it’s mostly about the person. I think I work with a lot of producers who might be the next big thing. I love The Monsters and the Strangerz from Miami. Everyone I’m working with is great; [they’re all like] “Oh, I produced ‘Sorry’ for Justin Bieber” or “I produced three tracks on the Rihanna album.”

I do pop. Pop is everything from The Weeknd to Taylor Swift to Beyoncé to Rihanna, [and my album is] a good mix of everything. There are some very soulful songs on there, but also electric dance songs, and also pure pop, darker songs with a trap vibe.

Man, I don’t know. I met her once and I just cried so much. It was just after a concert. I’d been looking at her for two hours as a fan, and then I meet her backstage, and I’m still kind of in that fan mode, so it was a meeting between a fan and an artist. If I were in the studio with her, I guess it would be different because that would be like two artists working together. When I think about her, I think about her being like a good mom, I don’t know why, she just seems really calm and mature. I have a friend who’s been working with her a little, and she told she’s super cool, like she just feels really young; she’s like a girl you want to hang out with. Hopefully [our song] would be the best song ever, but I don’t want to really collaborate with Beyoncé because she would outshine me! She outshines everyone, except for Jay Z and Nicki Minaj, basically.

Check out her performance on The Tonight Show below and read the full interview here.