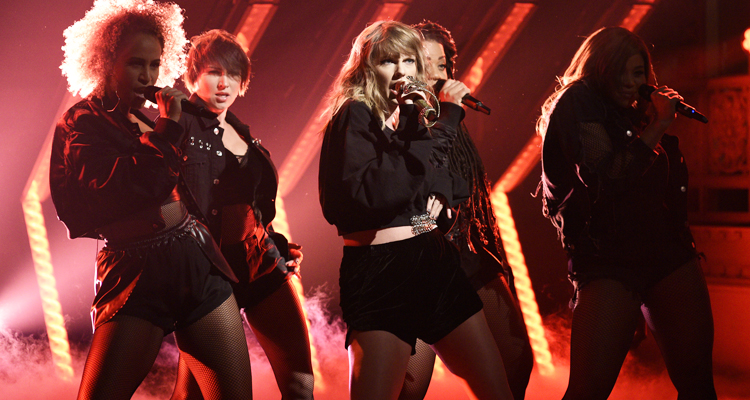 Taylor Swift is back!

On Saturday, Swift was the musical guest on Saturday Night Live, performing both “Call It What You Want” and “…Ready for It?” from her new album Reputation.

First taking the stage in a black sequined sweatshirt and short-shorts, Swift delivered a lively rendition of “…Ready for It?” the second single released ahead of album’s launch.

Swift continued her new snake motif by clutching a gold microphone in the shape of a serpent as backup dancers joined her onstage.

For her second performance of the night, Swift picked up her acoustic guitar and sang into a Reputation-branded microphone for a stripped down version of “Call It What You Want.” A cellist and four vocalists back Swift for the track, which is rumored to reference ex-boyfriends and her feud with Kanye West and Kim Kardashian; keeping with the theme of the song, for the SNL performance, the singer wore a shirt with a picture of a snake on it. Watch all the performance clips below.

Today, Swift announced a stadium tour in support of Reputation in December. The album sold over 700,000 streaming-less copies on Friday on its way toward going at least platinum in its first week of release.