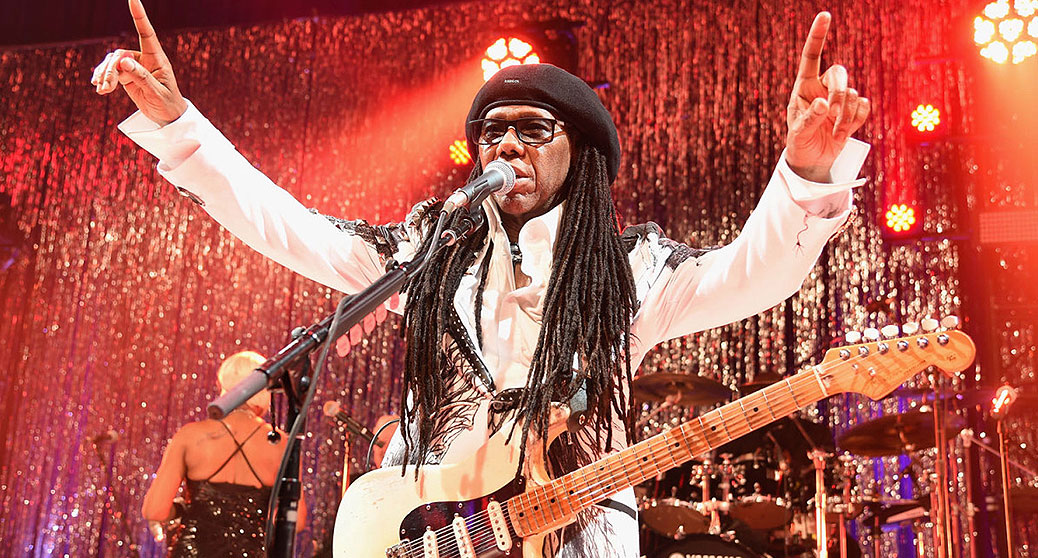 Nile Rodgers to be Inducted in Songwriter’s Hall of Fame

Best known for his musicality, songwriting, and productional mastery, Rodgers wrote countless tracks with his band Chic. Most notably are the two hits “Le Freak” and “Good Times,” which has been sampled many times by artists such as The Sugar Hill Gang’s “Rapper’s Delight.”  In addition, he co-wrote some of pop’s most iconic singles, collaborating with musical luminaries such as Diana Ross, Madonna (“Like A Virgin”), Madonna (“Like A Virgin”), and most recently with Daft Punk and Pharrell Williams on “Get Lucky” for which he won three Grammy Awards. Other notable artists include Lady Gaga, Britney Spears, and the late David Bowie. He recently sat down with Billboard to discuss a few of the most memorable moments in regards to his 1978 hit “Le Freak:”

“We were invited to Studio 54 by Grace Jones herself. We were just starting out, we had never worked with any stars. And she told us to come to the back door of Studio 54 and tell them that we were personal friends. We’d seen all the stuff about them separating the M&Ms and all that stuff so we wanted to get it exactly right. Grace has a very interesting, affected voice so we tried to put on her voice and say exactly what she said, thinking the bouncer would know. We ended up sounding like a cross between Bella Lugosi and Marlene Dietrich, but the guy slammed the door in our faces and told us, ‘Ah, fuck off.’ Studio 54 was the center of the disco nightclub universe at that time, it was the hardest place to get into and this was New Year’s Eve no less. So it was like, the ticket. We knocked on the door again and he said, ‘I told you, Ah fuck off.’ And we realized we weren’t going to get in.”

We went and bought a couple bottles of Dom Perignon, which we used to call rock’n’roll mouthwash, and we went back to my apartment and stated drinking the champagne and we made up a song called, ‘Ah, F–k Off,’ and we were going, ‘ah, f–k off, f–k Studio 54.’ And my partner at the time said, ‘Wow, you know, this is really happening.’ This was at least two years before hip-hop and I’m going, ‘Bernard, we can’t get a song on the radio that says fuck off, that’s crazy.’ So we changed it to ‘Ahhh freak out’ and instead of it being a protest song it ended up being a celebratory song about what was going on in Studio 54. At that time there was a dance called Le Freak, so we called it Le Freak and then Bernard went, ‘c’est Chic,’ so we made it all about our band doing this dance called Le Freak at the back door of Studio 54.”

On what went on with the French accents:

“Because we pretended to be French, and we weren’t French at all — people thought we were at the beginning, that was our way in, that was our shtick. But our pronunciation wasn’t perfect at all. People actually thought we were saying ‘Africa’ instead of ‘ahhh.’ Think about how clever it is — ‘Afffrica… le freak, c’est chic.’ The record became so big and to this day people who speak French think we’re saying Affffrica.”

“The record was the biggest-selling record in Atlantic history. It held that title for 33 years just until Flo Rida beat us out a few years ago.. We cut off our sales at 7 million because we were afraid if we let people keep buying ‘Le Freak’ nobody would buy our album. Because in those days black artists only got two singles unless you were the Jackson 5 or somebody really famous. So if we’d let [the record] go to 8 million, Flo Rida would not have caught up. He only sold, like, 7,200,000.

On his busy schedule:

“I only sleep a few hours a night, since I was a child.  An exceptionally good night is three and a half to four hours, and normally I can do two hours. I think I go into REM sleep right away, so I think I’ve gotten a long sleep. The thing that’s really scary is that if I come home and I’m exhausted and fall asleep four an hour or two, when I wake up I think it’s the next morning.”

Read the full interview here and be sure to let us know which Nile Rodgers classic you dig the most. Be sure to catch the Songwriter’s Hall of Fame ceremony and learn more on their website.