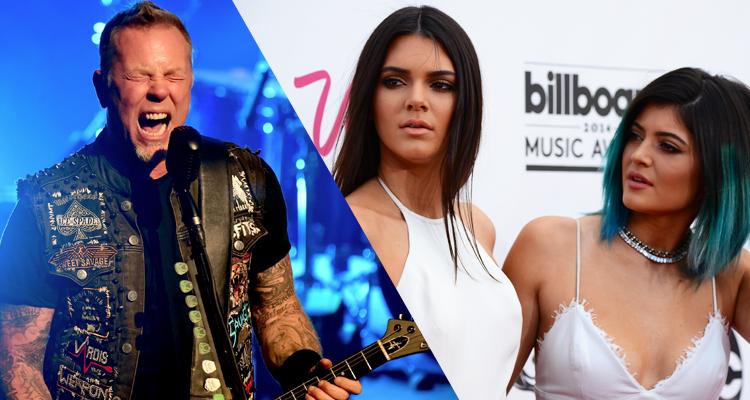 The Jenner sisters ignited a firestorm of controversy when they unveiled a line of t-shirts misappropriating classic rock and hip-hop acts. Since then, everyone from Arcade Fire to the Notorious B.I.G.’s mom has weighed in on the poseur-y concept and disrespect use of music iconography.

Metallica‘s James Hetfield is the latest to criticize Kendall and Kylie Jenner’s line of controversial T-shirts, which feature the sisters’ faces superimposed over the likenesses or logos of various musicians and bands including Metallica, the Doors, Tupac and the Notorious B.I.G. Each tee was priced at  $125, by the way.

“I guess what they were thinking is, ‘We can do whatever we want,'” Hetfield said in an interview with ET Canada. “To me it’s disrespectful.”

The Metallica tee in the Kendall and Kylie line featured the cover art for the band’s debut album, Kill ‘Em All, with a Kylie Instagram post superimposed over it, complete with the number of likes and a caption referencing John Mayer’s “Your Body Is a Wonderland.”

“We’ve spent 36 years working, doing our best, to keep a really close connection with people [and] make every note count,” Hetfield said. “And someone just throws something up over something that we feel – not that it’s sacred or anything – but show some respect.”

I am not sure who told @kyliejenner and @kendalljenner that they had the right to do this.  The disrespect of these girls to not even reach out to me or anyone connected to the estate baffles me.  I have no idea why they feel they can exploit the deaths of 2pac and my Son Christopher to sell a t-shirt.  This is disrespectful , disgusting, and exploitation at its worst!!!

The controversial shirts were quickly pulled from the Jenners’ online store after numerous artists expressed their displeasure. Biggie’s mother, Voletta Wallace, slammed the sister’s work, calling the shirt “disrespectful, disgusting and exploitation at its worst,” while the Doors issued the sisters a cease-and-desist letter for a shirt featuring Jim Morrison.