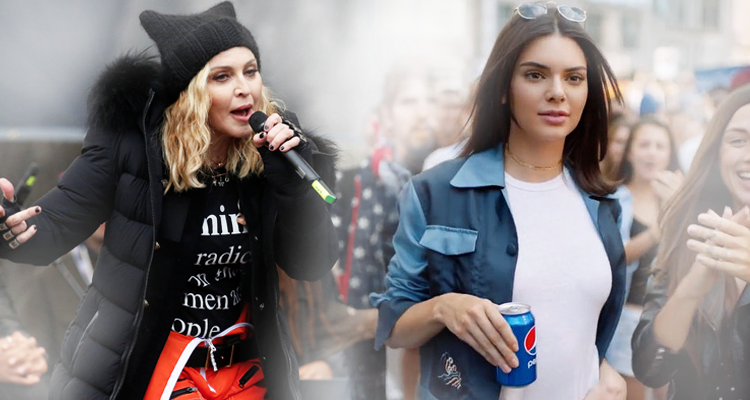 Madonna, is having a good laugh over Kendall Jenner‘s Pepsi commercial. Just when Pepsi pulled the commercial, Madonna posted a Throwback Thursday photo on Instagram one day early to show support for the ad-gone-wrong.

When you wake up and realize that Shit just really doesn't make sense! #chosen Side Note: My Pepsi commercial was pulled 30 years ago because I was kissing a black saint! #ironic

The singer’s not-so-subtle Pepsi shade comes almost three decades after her own Pepsi commercial was pulled from the air in 1989.

To add a little backstory, Pepsi pulled Madonna’s own ad — a comparatively more tame affair, set to then-current single “Like a Prayer” — because that same song’s controversial video debuted the next day. A Pepsi spokesman said at the time, “When you’ve got an ad that confuses people or concerns people, it just makes sense that that ad goes away,” and that sounds like what happened with Jenner’s ad.

Madonna also posted a picture on twitter on the same day that Pepsi pulled the ad, showing her wearing all-red at the 1999 GRAMMY Awards holding a can of Coca-Cola. To really hammer her point home, she zoomed in on the Coke can.

Even Bernice King, daughter of Dr. Martin Luther King, Jr., chimed in on twitter after seeing the ad:

If only Daddy would have known about the power of #Pepsi. pic.twitter.com/FA6JPrY72V