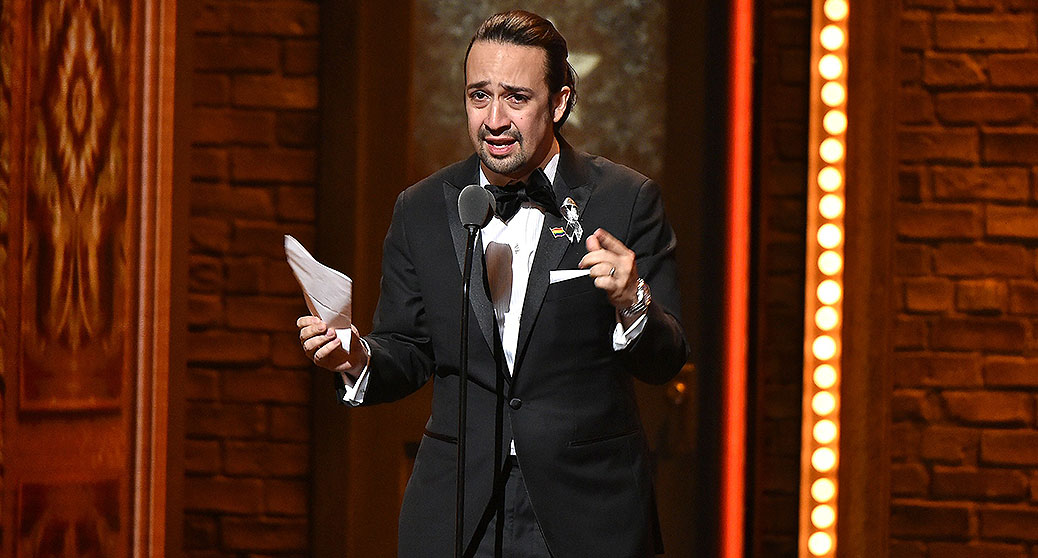 Hamilton star and creator Lin-Manuel Miranda gave a moving speech Sunday night as he accepted his second Tony award for Best Score of a Musical. Known as a master wordsmith and hip hop virtuoso, Miranda accepted his Tony for Best Original Score in 2008 for In The Heights with a freestyle, thanking his collaborators and wife Vanessa. This year, however, he claimed he was “too old to freestyle,” and delivered a sonnet instead. Visibly shaken by the tragic events that occurred in Orlando, Florida, he dedicated his speech to his wife and the victims of the shooting that night.

My wife’s the reason anything gets done
She nudges me towards promise by degrees
She is a perfect symphony of one,
Our son is her most beautiful reprise
We chase the melodies that seem to find us
Until they’re finished songs and start to play
When senseless acts of tragedy remind us
That nothing here is promised, not one day
This show is proof that history remembers
We live through times when hate and fear seem stronger
We rise and fall and light from dying embers
Remembrances that hope and love lasts long
And love is love is love is love is love is love is love is love is love
Cannot be killed or swept aside,
I sing Vanessa’s symphony, Eliza tells her story
Now fill the world with music love and pride

Tony Awards host and star of The Late Late Show James Corden also addressed the shootings a the beginning of the ceremony, while actors Frank Langella and Jessica Lange expressed similar sentiments. All in all, the message of the night was that “love is love is love is love is love. It cannot be killed or swept aside,” as Miranda puts it so eloquently. Please think of the victims and their families in this time of need, and contribute in any way you can.

Watch the full acceptance speech of Lin-Manuel Miranda below