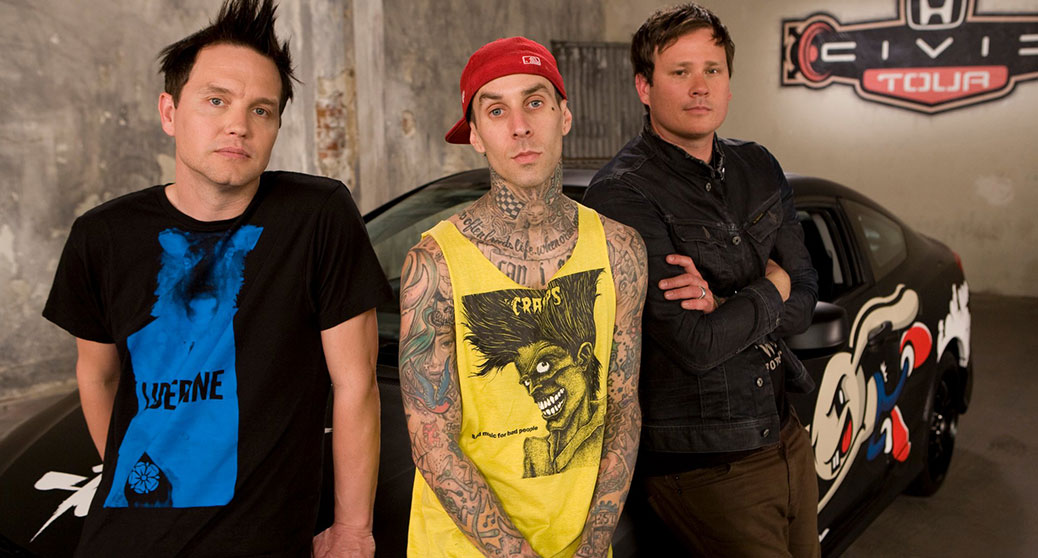 Pop punk veterans Blink 182 are about to release their first album without founding member Tom Delonge. And according to Billboard, that new record, titled California, is on track to knock out Drake from the number 1 spot on the Billboard 200 Chart. The band’s notorious antics, on-stage banter, and a string of successful albums such as the platinum Enema of the State and The Mark, Tom, and Travis Show made Blink 182 (or simply ‘Blink’) their generation’s favorite band. Now with vocalist/bassist Mark Hoppus the only original member left, Blink 182 recently sat down with SPIN to discuss over two decades of ‘dick jokes,’ their new member Matt Skiba, and all the hit songs they’ve written over the years.

On starting out as a band

Mark Hoppus: There was a club in San Diego called Soma, where we used to go see punk-rock bands play all the time. There was an upstairs which probably held about 1,000 people, and there was a downstairs that probably held 150 people. If you could get 50 people to say that they were there to see your band in the basement, you would get to open a show for the upstairs venue. So that was our goal, to make it to the upstairs. That was cool because it meant that people who weren’t our immediate friends were paying to come see the show.

On recording their iconic album Enema of the State

Mark Hoppus: I think that we were really hitting our stride, songwriting-wise. I think that breaking into the mainstream — it was just the right cycle of music for us. People were kind of over the boy-band, pop-princess, manufactured sensibility, and were excited for guitars and angst and energy and enthusiasm, which is our thing.

I think people take Blink more seriously now than they did before. And it’s largely our fault because we called [our records] Enema of the State and Take Off Your Pants and Jacket and had videos of us running around naked through L.A. and did stupid jokes onstage and things like that.

We were always kind of the underdogs, especially critically. People wrote us off as this joke band. But the people who listened to Blink knew that we were silly and whatever, but we wrote songs about divorce and suicide and depression. We did have joke songs, but we had songs like “Adam’s Song” or “Stay Together for the Kids.” Those kids that were listening to Blink are now the ones that control all these outlets that used to just write us off.

On staying connected with their classic songs

Mark Hoppus: Every one of those old songs is like a tattoo or a scrapbook or an old photograph. There are just songs that define certain moments in your life. Everyone has a song that got them through a bad breakup or they put on and it made them feel like they wanted to go out and kick the world’s ass with their friends on a weekend. Those songs still feel like that to me. When I play “The Rock Show,” I still get excited in the same way we did when we first wrote that song.

Travis Barker: Enema of the State is kind of like a tattoo, like a moment in time, but it aged well. It’s not like one that you’re looking at like, “Aw, God, I gotta get that s**t removed.” It’s something we’re proud of. For me, I had just come in the band. I was a lot like Matt, I was very new at that point. I was just touring with the band, and it was time to make an album and be a part of the writing process, and being able to have my input on tempos and different rhythms and stuff was really fun and exciting.

Mark Hoppus: I remember when we were writing Take Off Your Pants and Jacket and writing jokes, I said, “I want to take this as far as we can go.” We had some joke stuff before, but I wanted to really push it on that one. Then when we did the untitled record, we just didn’t feel like putting joke stuff on it, so we didn’t. It wasn’t really a deliberation or a real introspective thing like, “Are we going to joke on this one, are we not going to joke on this one?” We just didn’t feel like it on the untitled one, so we didn’t.

We worked very hard on that record to do something different and that we were proud of and try a bunch of different ideas. We worked on it for a year, and pulled every song apart, down to its foundations, in different arrangements and different styles. It was like this gigantic musical laboratory that we were going to every day. I love that record, I think that’s one of the high watermarks of us as a band.

On their falling out with vocalist/guitarist Tom Delonge

Mark Hoppus: It was weird for a number of months when Tom and Travis started Box Car Racer in 2001, and I talked to Tom about it, and we hashed it out back then. It’s never been an issue since before the untitled record. Everything was fine after that. This time, Tom kind of quit the same way he did the first time in 2005, where he just had his manager contact us and say that he didn’t want us to contact him, and that he wasn’t going to do Blink anymore.

On their newest member Matt Skiba and recording ‘California’

Matt Skiba: It was a collective effort for sure. Mark and I sang pretty much every harmony, every lead, everything to the point where it was like, “Did you write that, or did I write that?” It was just a matter of mixing it. We were all hands on deck.

I’ve always been a really big Blink fan, and I still want it to have that spirit, but bring my own voice to it. I’m not going to try to imitate [Tom], but there are certain pronunciations and certain things that have to still have that spirit. I try to be respectful of that for the band and for the fans, but also bring my own flavor to it.

Mark Hoppus: What I love about Blink is [that we write] catchy melodies with dark lyrics. Matt is great at that; I think he has an amazing talent for writing the most gorgeous songs that are about death and murder. At one point during the writing process, we were joking that we should call the album Death Bloodbecause there were lyrics about death and blood and drowning and whatever. But no, I still feel like I’m writing from the same place that I did on [Blink’s 1995 debut album,] Cheshire Cat.

On being taken seriously

Mark Hoppus: We were always the butt of our own jokes. I think that people saw that we weren’t really making fun of anybody except ourselves. So I think the songs would still hold up. We’re still playing them 15 years later and having a great time doing it.

Are you excited for Blink 182’s comeback album? Be sure to let us know on our Facebook and Twitter!