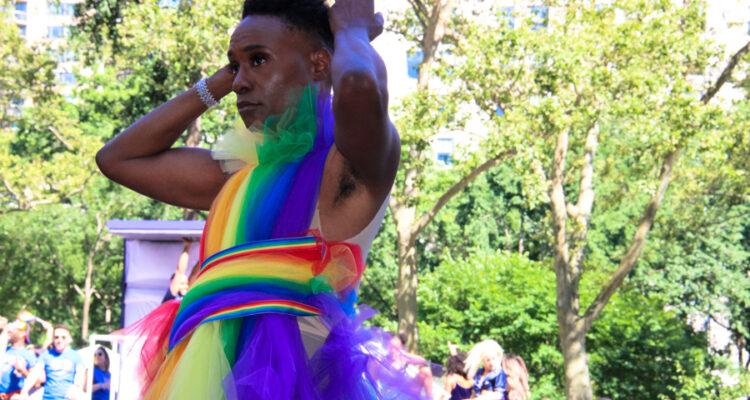 Known best for his starring role in the FX televsion series Pose, about the underbelly of NY dance clubs / voguing life, Billy Porter recentely announced that he’s been living with HIV-positive for 14 years.

In an interview released on May 19, the Emmy, Golden Globe, and Tony Award winning singer/actor mentioned signing bankruptcy papers and being diagnosed with Type II Diabetes and HIV in 2007 during what he calls “the precipice of obscurity.” “This is how HIV-positive people now appear.” “I’m going to die from something else before I die from that… This is the healthiest I’ve ever been in my life.” Porter said that as a gay Black man, the guilt he felt as a result of his religious heritage, and the uncertainty of professional consequences, had kept him from coming out sooner. Until recently he hadn’t told his mother or his co-stars on the award-winning FX series “Pose,” where he plays an HIV-positive character named Pray Tell.

He explained, “Where I come from, growing up in the Pentecostal church with a very religious family, HIV-positive is God’s punishment.” Quarantining during the Covid-19 pandemic, which Porter described as “creating a safe space for me to stop and reflect and deal with the trauma in my life,” gave him the opportunity to think. After some self-reflection, he decided it was time to “put on my big boy pants and talk…The healing comes from the truth. And I’m hoping that this will set me free… I hope this liberates me so that I can experience true, unadulterated joy, peace, intimacy, and sex without shame,” he stated. “This is for me.” “This is everything I’m doing for myself. I have way too much s—- to do, and I’m no longer afraid of it. That was the stumbling block for me, I told my mother. I don’t give a damn what someone else has to say. You can either join me or get out of the way.”

According to the CDC, black gay and bisexual men face more obstacles to HIV prevention and care than other groups, including the cumulative impact of racism, HIV shame, and homophobia, which may discourage them from getting screened and receiving treatment. Doctors may discriminate against LGBTQ citizens in general, leading them to mistrust the medical profession. In a 2012 poll of Black men who had sex with men, 29% said they had “experienced racial and sexual orientation stigma from health care providers,” and 48 percent said they had “mistrust of medical establishments.” As Porter said in his interview, if Black queer men reveal their HIV status, they can face rejection and isolation from their peers and families, .