After 21 years, Ultra Music Festival is ending its relationship with Miami.

The gathering announced that it had voluntarily terminated its license with the City in an open letter to fans posted to Twitter. This news comes after the festival’s plagued attempt at a move to Virginia Key in March of this year. Fans should not be discouraged though, as Ultra’s statement says it is “now finalizing a new South Florida location.” Read the whole explanation below. 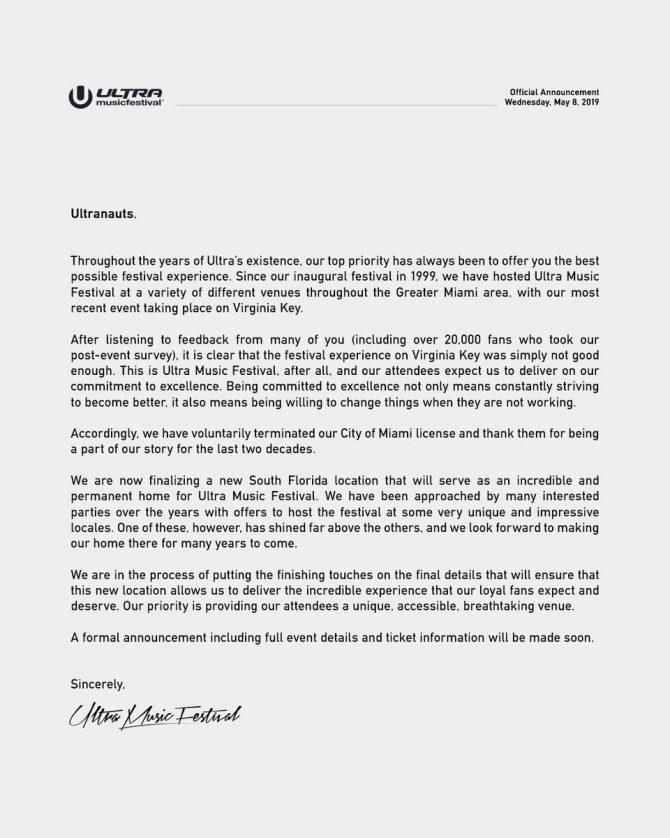 Ultra’s Miami troubles began in 2018, a few months following its celebratory 20th-anniversary edition. The City purposely failed to renew the festival’s contract, effectively kicking it out of its long time, downtown home at Bayfront Park. Those opposed to Ultra’s original presence cited traffic issues and noise complaints from nearby residents, but those problems were nothing compared to those that arose from a move to Virginia Key which included overwhelmed shuttle services and increased marine life stress.

All in all, Florida’s premier EDM festival decided it was best not to stick around so stay tuned for more news regarding Ultra’s new location.