As Pride Month approaches, Troye Sivan and Charli XCX have announced the lineup for their first annual Go West Fest, a one-day Pride music festival to be held in Los Angeles.

The musical duo curated the lineup for the freshman gathering, including openly queer acts like Carlie Hanson, Leland, Dorian Electra, Gia Gunn, Quay Dash, Chika and Pussy Riot, along with strong allies’ Allie X and, of course, Charli herself. The event will also feature a number of dance sets by up-and-coming DJs Baby Uniq, Alima Lee and K.O. AKA Koala. Check out the whole lineup below. 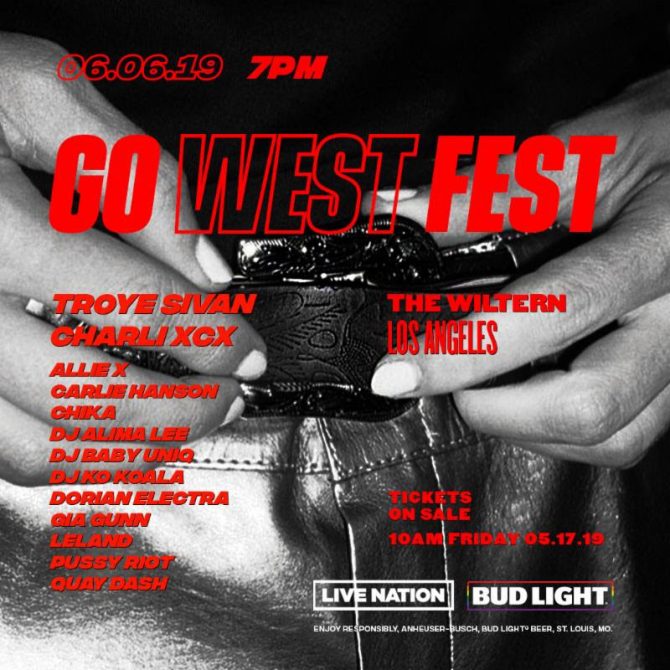 In addition to the musical aspects, a number of artistic offerings will be available including the Los Angeles-based, nonprofit art gallery Junior High that will curate the Go West Fest Artist Circle, a space at the festival showcasing emerging LGBTQ artists from Los Angeles.

A portion of the proceeds from the West Coast event will go to benefit GLAAD, with the drink sponsor, Bud Light, selling their special edition Pride bottles that will also benefit the organization. Go West Fest will take place on Thursday, June 6 at The Wiltern theatre in Los Angeles at 7 p.m. PST. Tickets for the event go on sale Friday (May 17) at 10 a.m. PST.