Marc Jacobs is asking a judge to dismiss a lawsuit filed by Nirvana last December that claimed copyright infringement over images used in one of the fashion designer’s collections resembling the band’s well-known happy face logo.

In documents filed Friday in a California federal court, the clothier’s lawyers argue Nirvana does not own the copyright to the smiley design, that the registration is invalid and, further, that there are pronounced differences between the material covered by the iconic group’s registration and the artwork used by Marc Jacobs. They go further in their officially statement:

“The Complaint stems from the false premise that the Plaintiff owns a U.S. copyright registration on a smiley face design (albeit a different one than the one found on the Accused Products), when in fact, that smiley face is merely a fraction of the full artwork covered by the registration and the remainder of the covered artwork is not alleged to have been used on the Accused Products.”

The “Redux Grunge Collection” was unveiled in November 2018 to celebrate the 25th anniversary of Marc Jacobs’ SS93 Grunge Collection, which was defined by a smiley face logo. The new version features an M and a J instead of Xs for its eyes (as in the Nirvana version), and it reads “HEAVEN” instead of “NIRVANA” in a typeface similar to the band’s font. The Aberdeen-based group’s lawsuit is claiming that the sale of the face-featuring designer products constitutes copyright infringement, false designation of origin, trademark infringement and unfair competition. Check out the two logos below and see the differences (and similarities). 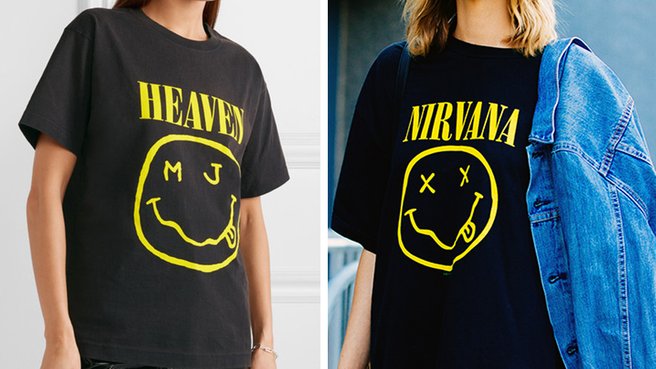