Glastonbury Festival recently announced their full lineup, including world-class acts along with a new set of very specific guidelines.

Taking place in England, the gathering will host headliners The Killers and the Cure, as well as Brandon Flowers’ Vegas band, Robert Smith and local rapper Stormzy supported by even more top-notch acts Janet Jackson, Lauryn Hill and Miley Cyrus, among others. The UK rap contingent is especially well represented with Stefflon Don, Little Simz, Kate Tempest, Loyle Carner, Slowthai and Bugzy Malone set to perform. See the full list of acts below. 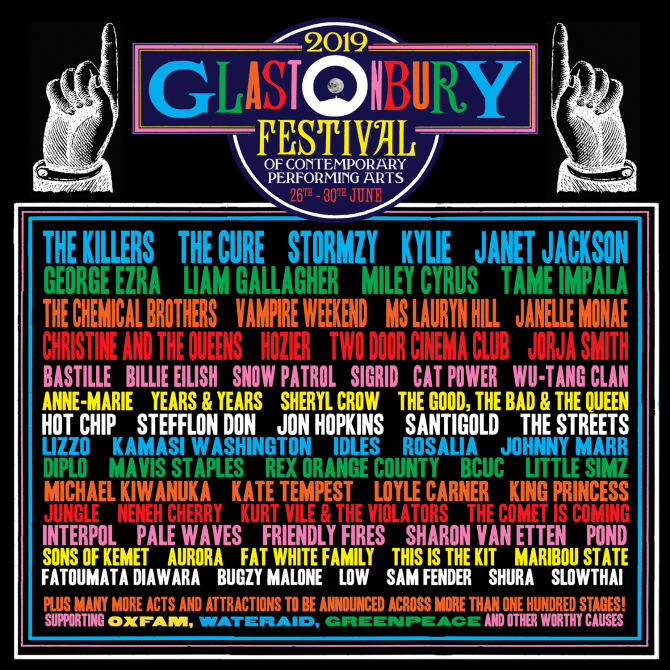 The five-day festival is also implementing new rules concerning sustainable living. For the first time in its nearly half-century history, organizers have announced that single-use plastic drink bottles will not be available to purchase at this year’s concert event. Attendees will, however, be allowed to bring in their own (empty) containers in an effort to help out the planet.

Co-organizer Emily Eavis explains, “It’s paramount for our planet that we all reduce our plastic consumption, and I’m thrilled that, together, we’ll be able to prevent over a million single-use plastic bottles from being used at this year’s Festival. I really hope that everyone – from ticket-holder to headliner – will leave Worthy Farm this year knowing that even small, everyday changes can make a real difference. It’s now or never.”